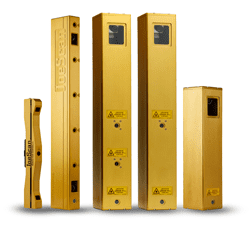 High-speed scanning, which is roughly anything over 300 scans per second, can get tricky. These are the factors that must go into your system.

MaxLaserOn is related to the inverse of the number of the scans per second that you want and the 300 microsecond overhead for reading image data from the camera. Here's the formula for calculating the MaxLaserOn value:

A system that requires 500 scans per second would have a MaxLaserOn calculated like this:

The downside to low exposure times is that the laser may not be bright enough to fully illuminate the object. In that case, you should move your scanner closer to the object or lower the LaserThreshold parameter.

Background Subtraction (don't use it for high speed)

What Happens When The Scanner Overdrives

While in the process of tuning a system, these are the indicators of trying to run a scanner too fast: